Home ➨ As One Devil to Another: Sample Letter - XV Modern Art 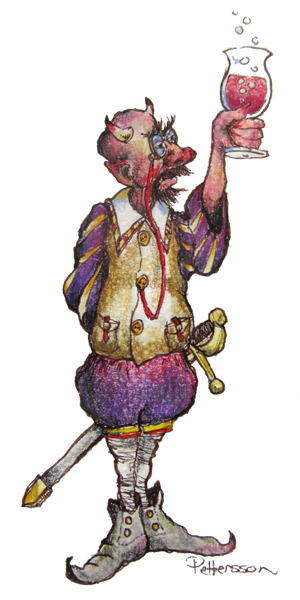 I see from your report that you've had quite the day. Not a successful day, but, shall we say, an interesting one. I thought perhaps a trip to the Modern Art Gallery with the minx would be unwise, but there are times when a Mentor must permit the little stumbles of a novice to teach him to avoid greater mistakes in the future. Though your mission was a failure, it was not, surely, without its amusements. The look on your face must have been just too funny. If you allow these small failures to become a trend rather than an aberration, it will not be long before I am providing you with even greater amusements. I will leave you to consider on your own how to repair this little breach, which should be easy even for you, as the client is a novice and the minx has no friends. The problem is that you were trying to make the client a bigger fool than she has the capacity to be. You toppled her efforts at charity, yes (which, alas, she now regrets), but you have paid a high price for this little victory by jeopardizing the valuable relationship you have been building between the client and the minx and diminishing the value of the minx's opinion in her eyes.

Obviously, by this visit you intended to further the client's degradation by coarsening her taste, replacing her better judgment with finely shaded degrees of dishonesty, and enhancing whatever intellectual snobbery she already had by sprinkling on it a fine, decorative sediment of cultural snobbery. Instead, the client, again, I'm afraid, remembering the words of her aunt, dug in her heels and called each 'work of art' by its rightful name. Refusing to have her spirit and sensibilities degraded, she responded like any clear-thinking, educated person should, with incredulity, revulsion, scorn, and, deadliest of all, laughter. If the Adversary had more like her, we should have to give the artists in our service at least a modicum of talent to make them of any use to us at all. As it is, all they require is a gift for self-promotion, a flair for self-delusion, an instinct for fashion, or infinite nerve.

They began well enough, the minx walking the client through the gallery, the client observing that the building, a converted gasworks, was a space well-suited to the purpose and admirably fitted out. They walked through a room where painters, presumably in the process of refurbishing that part of the gallery, had left their buckets and tools. Not so, said the minx. This was an 'installation.' The client nodded, her suspicions aroused. They passed three wooden boxes, cobbled together by an 'artist' with a rudimentary ability to attach one piece of wood to another. This work was pretentiously 'Untitled.' The client thought of several appropriate and amusing titles for it, none of which amused the minx. On they walked, past the pile of bricks, which the client, her credulity strained to the breaking point, kicked when no one was about, knowing that even the 'artist' would not notice. Finally, the client listened in slack-jawed astonishment to the minx's admiring assessment of the jewel-encrusted rhinoceros dung, which she proclaimed as Art. No longer able to contain herself, the client succumbed to the giggles and then burst into irrepressible laughter. Having no argument to support her opinion, the minx was silenced. Even she could not quite believe that animal dung is Art. Their afternoon ended with an early departure, precipitated by the minx's icy resentment.

You see here, in the minx's response to what has been placed before her, the triumph of the Subjective over the Objective. With the elimination of objective standards of every kind, the very concept of Art will become as much a smudge and blur as our Philological Department has made of language. When all works of art finally have equal value, no work of art will have any value whatever. I can taste victory.

The triumph of Subjectivity over Objectivity is one of the most amusing by-products of the Modern Era, affectionately known in Hell as the Age of Narcissism, which we have fashioned in our own Image and Likeness, making pervasive a degree of egocentricity only just less virulent than our own, and bringing with it the erosion of respect for authority (in a universe of one, there is no authority to respect), the destruction of manners (there is no need to be polite, or to consider the needs, wants, and desires of someone who is not there), and a monstrous sense of entitlement almost as muscular as our own (if other people aren't there, you are entitled to everything).

We have disabled Art for most of its function, the broadening and uplifting of the human soul, through the implementation of one of our oldest, yet most effective, weapons: the Big Lie. A small but vocal minority proclaims that something which is manifestly preposterous is indisputably true — that jewel-encrusted rhinoceros dung is Art, for example. Then they shout down opposing views and bludgeon them into silence, demonstrating that argument is useless against them, and personally attacking anyone remaining who dares to speak the truth. Art thus becomes anything the artist — or his agent or promoter — says it is. Raise the price, and it becomes Great Art. Raise it yet again, and it is 'profound.' It is the Aesthetic of the Con Man.

You witnessed this new aesthetic in its subtlest form in the argument that flared up in front of the Picasso. Surely, proclaimed the minx, they could agree on that. The client responded, in rather unladylike fashion at least, with something like a snort. An interesting case, Picasso. He was a man of real gifts, blessed by the Adversary, but with our guidance his ego grew wonderfully distended. He discovered that his work had not merely financial potential but also social cache — snob appeal — and that eventually any little squiggle he chose to throw in the art world's face would be greeted with admiration and reverence and awe by the insecure and the gullible, and naturally by the cynical art dealers who profited thereby. So he squiggled and squiggled, and his imitators have squiggled ever since to their own profit. A great laugher, Picasso, or so I am informed by my colleagues. He laughed at them all as he cashed their cheques. Had he been able to laugh at himself, we might have lost him. No one has heard him laugh since his arrival Down Here.

Art no longer need be something whose merit has been evaluated by highly educated, civilized people, versed in the standards of excellence which have been valued for centuries. Thus, anything which can drip or be thrown from a brush to a canvas becomes a painting. Excrement becomes sculpture. Bestial grunting which is utterly devoid of melody or tonality becomes music. The trend is clear. Telephone directories, as I have previously predicted, will become literature. Soon, spitting on the sidewalk will be theatre, profanity will be oratory, belching will be opera, and digging a ditch in which to sleep will be architecture.

Do you see the awkward dilemma we have placed in the path of the clear-sighted humans who have made an effort to acquire taste, who judge by objective standards, and who can actually (blast them!) think for themselves? If we provoke them to speak against this nonsense, they are uncharitable, or at the very least highbrow prigs, or even philistines if we can manage creatively to invert the snobbery and self-interest of the pretenders; if perceptive humans forbear to speak out of charity, diplomacy, fatigue, hopelessness, or impotent frustration, their silence is our triumph.

We do have our days now and then, don't we?