Home ➨ As One Devil to Another: Sample Letter - III English Literature in the Academy 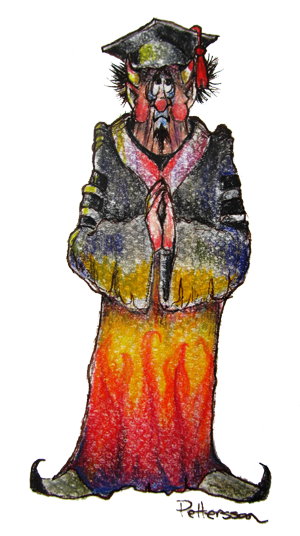 III English Literature in the Academy

We shall now begin the task of satisfying your ever-growing hunger.

A client has been selected for you by the Low Command. She is a postgraduate in the English Department of an old and prestigious university, which means, happily for us, a hotbed of arrogance, spiritual erosion, and social vanity. She is quite bright, by human standards, which could work very much in our favour, as her environment is perfectly suited to inflame her latent intellectual snobbery and many of the other lovely vices which we are trying to make endemic.

We must consider how best to exploit her aspirations. She has set her sights on a career in academia. Do we want to propel her to dizzying heights of academic success, distending her ego and making her a loathsome prig to everyone but her most accomplished colleagues, wallowing in the envy she provokes in her peers and the fear she instills in her students? Or shall we raise her just to the level of mediocrity that will cause her to aspire to, but never reach, those dizzying heights, an onlooker who stokes her hunger by publishing a few books here and there, but is mostly ignored by the academic community, and who spends her life picking at the scabs of envy that will form on her like a spiritual crust, never noticing the redeeming presence of the few eager students that could become her friends? Shall we degrade her still further, dash all her hopes, and guide her to the endless drudgery of teaching grammar school English, slowly grinding her into a dust of disappointment and resentment, blinding her to the fact that it is there, were her motivations pure, that she might actually do the most good, by inviting young minds as yet unformed to the great feast of literature which she once enjoyed, before books became the building blocks of her ambition?

There is no need to decide the issue at once, but do keep it in mind. Perhaps we shall inflame her ego. Would you like that? There is nothing quite like the blinding flash of light that warms His Majesty’s dark heart when a soul, distended beyond recognition with its own conceit, bursts and is extinguished forever. And if we need to change course, this will give us maximum flexibility, as it will be easier to bring the client crashing down from prestigious heights than to build her up out of mediocrity late in her career.

A review of modern academic trends will here prove useful.

English Literature has only fairly recently risen to the dignity of a university discipline, and as such it remains infected by the scientific methodology of the greatly influential nineteenth-century German universities. Students there were required to produce ‘original research,’ which in the sciences has a certain utility, but we have managed by stealth to graft this standard onto the humanities, where it has almost no utility at all.

As a result, university libraries today are littered with forgotten and useless dissertations, each one a brick in the Great Edifice of Scholarship. They are usually written on arcane subjects, favoured by the intellectually insecure, who hope that they will not be subject to adverse criticism from their colleagues on subjects that none of them knows (or cares) about. We have so centred their attention on brick-making that we have made them virtually incapable of becoming architects.

The practice of literary criticism today produces articles laden with cumbersome jargon, intended to boost the self-esteem of the authors in the mistaken notion, promulgated of course by us, that their incomprehensible multisyllabic verbiage bestows intellectual cachet and dignity. This allows us to expunge any remaining vestiges of loveliness and humanity they might have experienced in their studies and wanted to convey. We must continue to hammer into their brains the uncomfortable suspicion that the study of literature does not require the intellectual muscle demanded in the sciences, augmenting their insecurities and motivating them to produce still more ridiculous gibberish. This can be a most satisfying recreation, though the ease with which it can be accomplished mitigates the pleasure. One does prefer some challenge.

There was a time, not long ago, when educated men regarded English Literature as nothing more than a pleasant hobby. When the serious study of English began, it meant not merely proficiency in spelling and grammar and a thorough knowledge of Modern English writing, by which educated men meant literature composed after Chaucer, but fluency in Middle English and Anglo-Saxon as well. Thanks to our tireless industry, it is now possible for a student reading ‘English’ to graduate with honours without being able to read Beowulf or Sir Gawain and the Green Knight, and without having even heard of Johnson, Cowper, Spenser, Traherne, Cowley, Bunyan, Chesterton, Williams, and dozens of other Master Spirits in the Adversary’s camp.

It gets better. The current intellectual fashion in English departments — Hell be praised! — is Deconstruction. Ah, how the word drips so deliciously from my lips! The basic tenet of Deconstruction is that the only value to be found in any text is the response it provokes in the reader — any reader. The author’s intent, his cultural milieu, the evolving meaning of words over time, and the cultural implications of that evolution have nothing whatever to do with the experience. This is convenient for the ‘scholars,’ as discerning these finer points would require actual work.

As a dangerously perceptive human once observed, a book is less like a window than a mirror: if a fool peers in, one cannot expect an apostle to peer out. If we may successfully carry forward the momentum of our victories, as surely we shall, it will not be long before the fools compose their dissertations on the telephone directory.